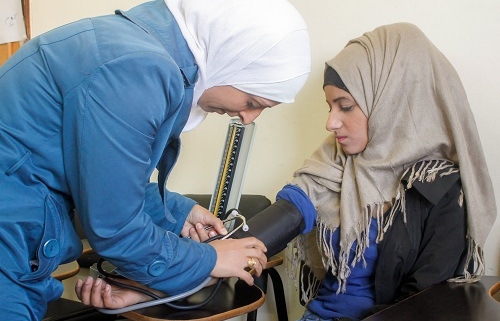 “There is nothing worse than the fear of losing a child. The fear that    minor cuts that usually go unnoticed and heal on their own can cause your child to bleed to death. Although I watch my 6-year-old Amjad carefully, yet being powerless hemophilia is overwhelming.” Amjad’s mother, Maha, says.
Hemophilia is a rare inherited genetics  disorder in which your blood doesn’t clot normally because it lacks sufficient blood-clotting proteins (clotting factors). If you have hemophilia, you may bleed for a longer time after an injury than you would if your blood clotted normally.
“I decided to stand strong  fight till the end. One day, whileI was attending an awareness raising session at Nour WGSS in Al Husainieh, and I learned about a first aid course. I joined the course where learned how to perform first aid basics during an emergency. Now I know I can actually protect Amjad against his threatening disease,” Maha  said.
Maha is now more confident and is no longer susceptible to the feeling of fear that accompanied her all her life. She has also joined a sewing course to be able to support her family.
“Nour is the only place that gave me and my family back hope and helped me believe that tomorrow is going to be better. Nour has helped me see that determination and persistence are the the only tools we need to change our lives.”
https://nour-foundation.org/wp-content/uploads/2018/09/1-3.jpg 337 500 admin https://nour-foundation.org/wp-content/uploads/2017/11/Nour.png admin2018-10-21 14:01:302018-10-21 14:01:30Maha Overcomes her Biggest Fears with Nour