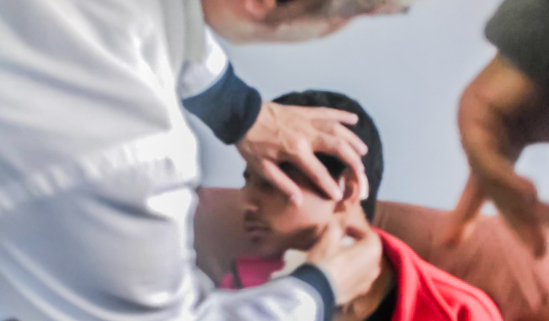 Hearing ability is important for children to develop speech and language skills as they grow. Children with hearing loss can have delayed language and speech development. Depending on the severity and cause of hearing loss in a child, hearing aids, cochlear implants and a combination of speech therapy or assistive listening devices might be recommended forms of treatment.

Just like many others, Ayman’s life was altered by the ongoing war in Syria. Not only did he lose his house, friends, and memories, but he also lost his hearing aid device.

Ayman, the young child with congenital hearing loss,  and due to the difficult economic situation of his family, couldn’t replace his losts hearing aid. This resulted in additional burden on him and his family because he was unable to communicate with anyone, attend school, learn knew vocabulary words, nor express his needs.

The only thing Ayman could do to communicate with others was to read lips to a degree and watch facial expressions and body language. Unfortunately, this was not enough.

When the 14-year-old Ayman visited Bidaya Center in Al Hussainieh, his story was published on the Facebook page of Your Generosity Counts Campaign (Min Eadak Ahla) where an anonymous benefactor offered to buy him a new hearing aid device.

Now, Ayman is capable of attending school and is fighting to reach his dreams. He is capable of hearing the sounds of the world and interact with people around him. His future is before him and great things will surely continue to emanate year after year.

Maha Overcomes her Biggest Fears with Nour
Scroll to top