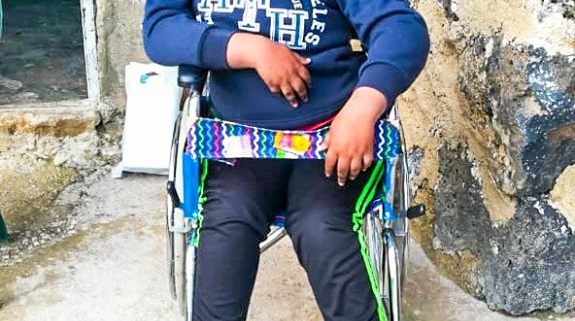 The teacher told me, that I shouldn’t be at school and that I’d better be a garbage collector,” Qais said explaining how deeply hurt he was when he heard these words in front of his colleagues.
“I was absent a lot from school because of my medical condition, so my teacher moved me to another classroom on the second floor to prevent me from coming to school,” Qais, who suffers from muscular dystrophy, continued.
Muscular Dystrophy is an incurable genetic disease that causes much suffering. However, medication and treatment help in dealing with symptoms and in slowing the course of the disease. While some parents give in to their children’s disabilities, Qais’s mother looks at her son’s disability as  challenge that they can together overcome.
Mrs. Ghada said, “My son was born in a normal state, but he was diagnosed with muscular dystrophy at the age of nine, and over time, it led to the gradual loss of vital functions.”
In her endeavor to seek help for her child, Qais’s mother tried to communicate with many charitable organizations to no avail. Then, she contacted the director of the You Generosity Counts  Campaign after hearing about the NFRD’s services from one of the volunteers of the Mobile Team in Saasa.
The necessary data was collected and the case was dealt with to find a solution as soon as possible.
Today, Qais has got a wheelchair through the Campaign by one of the benefactors, who refused to mention his name.
“I was determined to help my child to overcome all the bullying he had been subjected to from other children and his teacher in order to achieve success in his life, so I never hesitated or surrendered,”Mrs. Ghada added.
Qais has taken a lot of his mother’s strength,who has taken it upon herself to carry him on her back  to school every day. She believes in his ability to succeed despite all the difficulties they faces due to the war.
“My mother taught me that each one of us will find his chance in life no matter what, so we should keep trying to achieve our goals and never  give up,” said Qais with confidence.
https://nour-foundation.org/wp-content/uploads/2020/02/83671020_490509468325509_3811374542773813248_o-1.jpg 960 575 alaa https://nour-foundation.org/wp-content/uploads/2017/11/Nour.png alaa2020-02-26 16:15:172020-02-26 16:15:17Despite disability and bullying ... Qais seeks to fulfill his dream